Berlin bombshell: the Germans are losing the plot too

Germany’s position as Europe’s poster boy for office productivity is under threat, according to speakers at WORKTECH Berlin 2016

Germany’s status as a post-war model of industrial efficiency is so well entrenched in corporate consciousness that it is rarely challenged. But office productivity in Germany is wavering and new ideas are urgently needed according to keynote speakers at the latest edition of WORKTECH Berlin, held at The Factory on 6 July 2016.

If the idea of the Teutonic workplace machine missing a beat sounds far-fetched, consider new research from Markus Albers and Detlev Artelt, co-founders of Neuwork: German workers concentrate on average for just 11 minutes before interrupted; 87 per cent of the workforce has no true commitment to the job; up to 43 per cent of time is spent in meetings; and this whole sorry lack of motivation is costing the German economy 220 billion euros a year.

Not surprisingly, large, traditional German companies such as Daimler are fast embracing more flexible ways of working to try to close a productivity gap that didn’t exist in the past. In 2000, just four per cent of German companies offered flexible working, according to Neuwork; by 2012 that figure had risen to 60 per cent; today Neuwork no longer even bothers to track the question.

Markus Albers explained that ‘Germans are behind the curve’ when it comes to understanding how job insecurity will mean multiple career changes for German executives. Detlev Artelt meanwhile suggested that conservative German and Swiss banks might begin to emulate start-ups in their work environments. However things play out, it is all a shock to the stable German system.

At least the presence on the WORKTECH Berlin programme of Dieter Jäger, former managing partner of the Quickborner team and a pioneer of burolandshaft, was a welcome reminder of Germany’s rich heritage in workplace design over the past 50 years. Jäger took us through his cutting-edge office landscaping projects of the 1960s and 1970s, demonstrating how America fell at the feet of the Quickborner team. But even he set past achievements in a contemporary frame of concern: ‘The problem was to convince organisations that they needed to be reformed before we put them in a new landscape.’

Jäger’s present-day collaborator, Dr Sandra Breuer of Combine Consulting, contrasted the large departments doing routine clerical work back in the 60s and 70s, which provide fertile ground for burolandshaft, with today’s nomadic knowledge workers doing non-routine work. ‘It’s no longer about furniture and colour,’ explained Breuer. ‘The question is, do you want to work nice, or do you want to work better?’

That in essence is the dilemma that the German – indeed the European – workplace must face. ‘Working better’ is a radical shift from ‘working nice’: it means leaving behind the old certainties in workplace design and planning. Speakers at WORKTECH Berlin had plenty of advice for those setting off on this new, unfamiliar journey.

No shortage of ideas

Ben Munn of Instant Group pointed to the rise of many types of flexible workspace as an opportunity for companies to do thing differently. Ashley Coach, global director of interior design at WeWork, which is spearheading that rise, explained how each new building is a prototype that enables the company to learn more about how members use WeWork environments through robust feedback mechanisms. 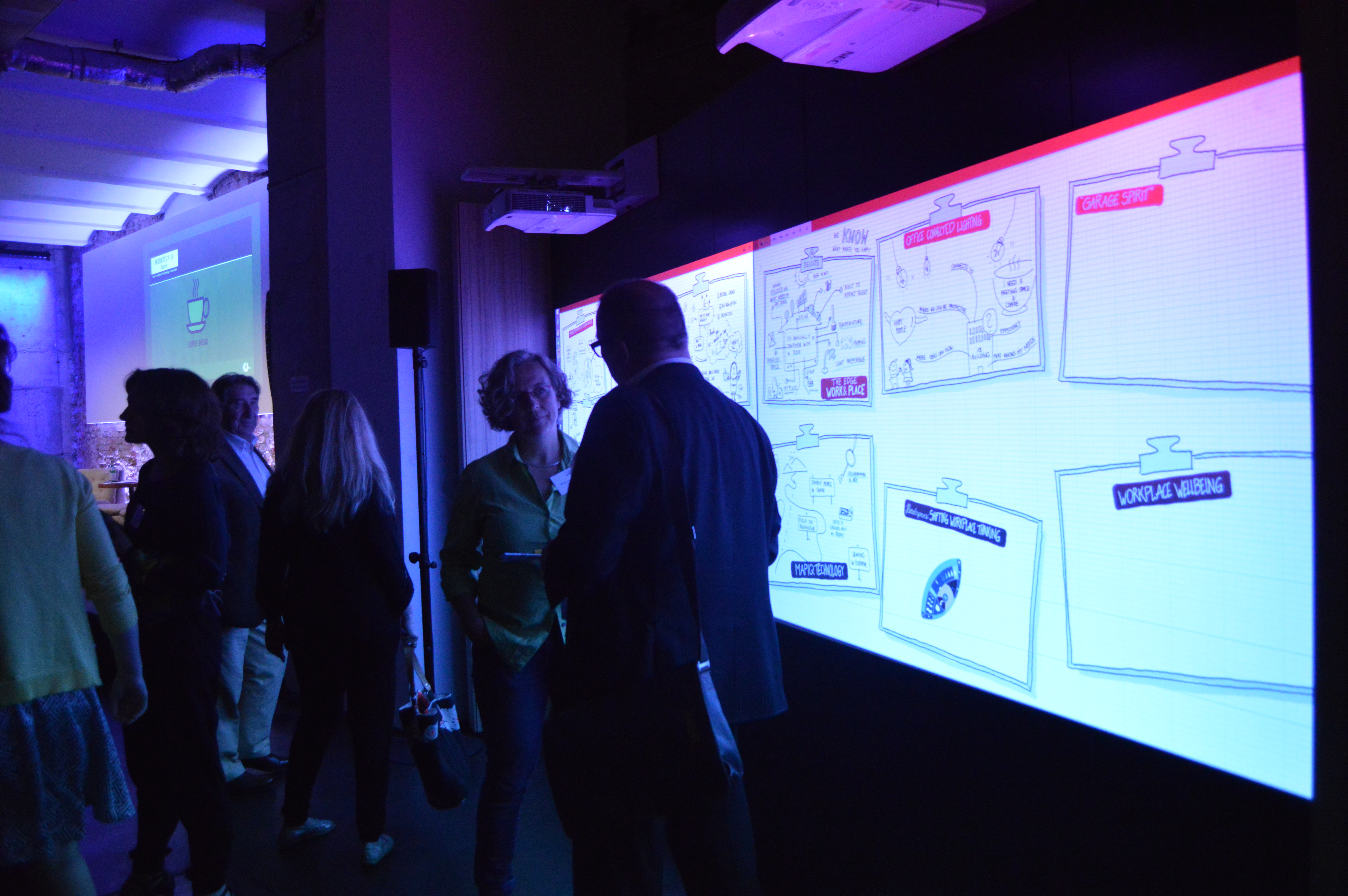 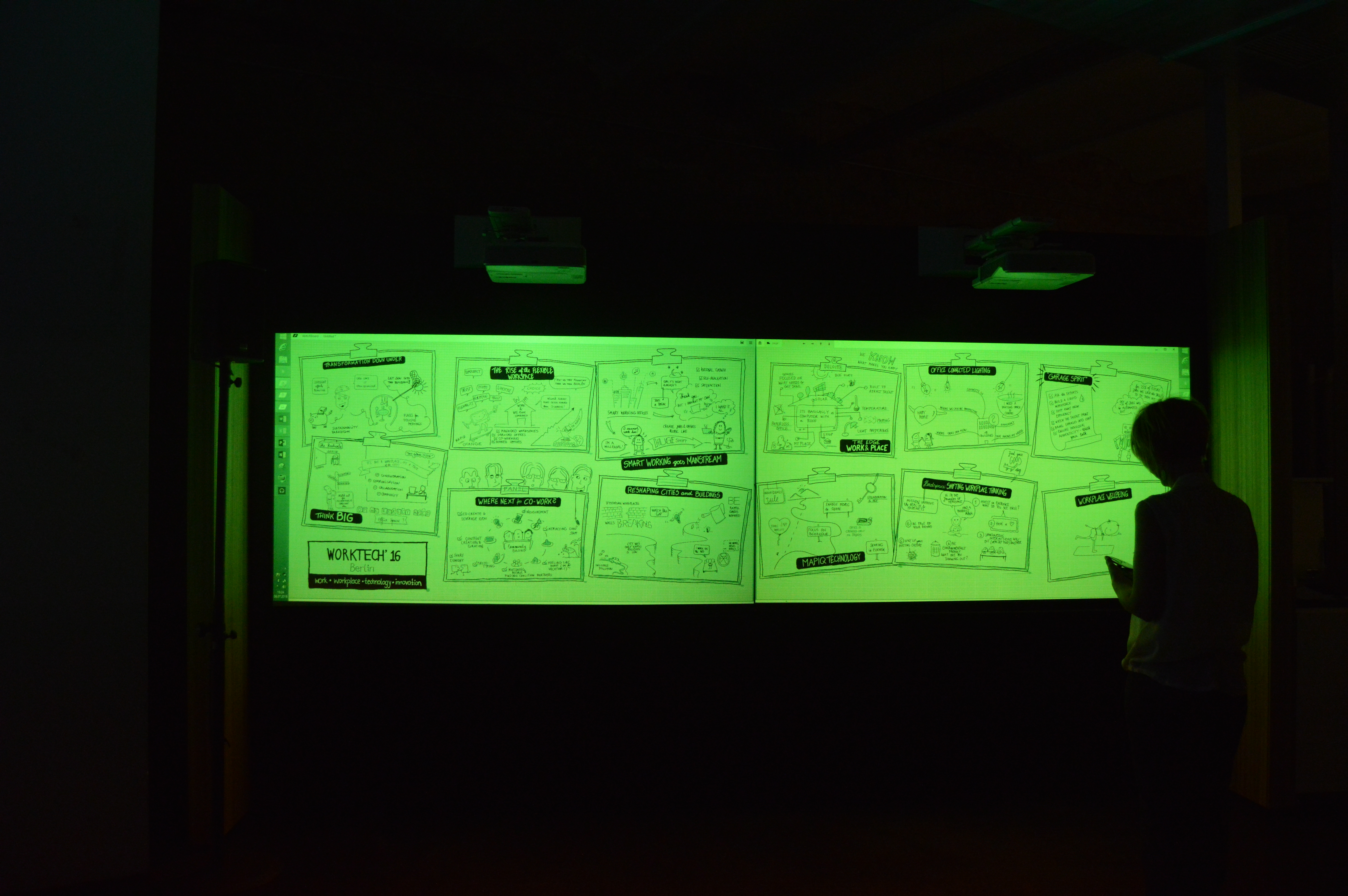 Didi Lenz, head of innovation at Bene, demonstrated the IDEA Wall (see above) as a way to bridge physical and digital ways of thinking. Paul Meulenberg and Martin Laws of Deloitte showcased The Edge in Amsterdam (‘a computer with a roof’) as the type of connected, innovative and sustainable workplace that will become commonplace in the future. Philip Tidd of Gensler revealed how co-design can help raise levels of mental wellbeing and engagement. Raphael Gielgen of Vitra proposed the spirit of the garage as a model for the ‘future workplace of curiosity and creativity’.

Architect James Grose of BVN, meanwhile, showed work from the New Zealand banking sector to demonstrate the concept of ‘messy vitality’, bringing complexity and diversity in workplace design to challenge traditional architectural notions of crispness and clean lines. Grose is interested in adapting the Italian medieval concept of the ‘broletto’, a democratic assembly literally meaning ‘a field surrounded by a wall’, for the future workplace.

Indeed there was no shortage of great ideas for change at WORKTECH Berlin. Even the conference venue itself – Factory Berlin, an innovation community that hosts Soundcloud, Twitter and Uber – was suggestive of new directions.

The big question is whether Germany’s famed but now faltering efficiency model is ready and able to switch gear.

West Coast whirlwind: why things are getting complicated

If California is not so much a state but a state of mind, then the latest edition of WORKTECH West…

WORKTECH’s first Tokyo conference took place on 5 April 2018 with the cherry blossom season in full bloom. It was…

Spontaneous, social and green: London lifts the lid on the new workplace

WORKTECH London, the flagship event in the global WORKTECH series, took centre stage in the wonderfully refurbished Purcell Room in…

Is empathy the missing link in tech integration for hybrid?

How can caterers create super-experiences for hybrid era?